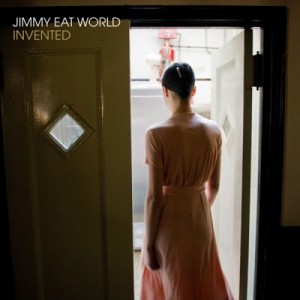 There are some things that just don’t change. Every year, fall rolls around, bringing in crisp, chilling breezes, reddening, brittling leaves, and for many, the songs of Jimmy Eat World playing in the background. Whereas some bands may provide the “soundtrack to your summer,” Jimmy Eat World has never been a summer band and they probably never will be. Some things just don’t change.

Jimmy Eat World’s seventh studio album, Invented, pushes the limits of the band’s musical spectrum, while still managing to satisfy their loyal fans. Despite the name, Invented is not an album that brings new ideas and innovation to the table. Rather, the record chooses to “reinvent” the band’s already strong musical roots, adding more and more dimensions.

Overall, Invented is a departure from the dancy, more pop-driven anthems found on Chase This Light. In this respect, the album can be seen as more of a progression from Futures or Clarity, with the same general organization. Invented does include some surprises though.

Opener “Heart Is Hard To Find” is a light, introspective piece that underwhelms on first listen. The song is definitely a grower, though, and its impact seems to increase exponentially each time the track is played. Generally speaking, the entire album follows this pattern, getting better with each successive listen. On the surface, Invented seems lacking, with almost no grandiose sing-along choruses, but deeper down, the album is chockfull of moments of sincerity.

Fifth track “Movielike” is a pivotal turning point for the album, changing the overall atmosphere. “Coffee and Cigarettes” directly follows, highlighting the new harmonies between Jim Adkins and Courtney Marie Andrews, who also provides backing vocals for “Heart Is Hard To Find”, “Movielike”, “Cut”, and “Invented”. (Rachel Haden also provides backing vocals on “Stop”.) “Coffee and Cigarettes” is a fun, addictive track that may indeed be more addictive than its real life counterparts (though having never consumed either, I may not be the best source).

The new vocals, as well as a song sung entirely by guitarist Tom Linton (“Action Needs An Audience”) are the most drastic stylistic differences that separate Invented from the rest of the band’s discography. “Action Needs An Audience” is raw and hits you in the face, a definite nod to the punk roots of the band. But despite these anomalies, every track sticks together as a cohesive unit, guiding you through the experience that is Invented.

And that’s what the album truly is and was meant to be. Invented underwhelms on first listen, but the entire experience keeps you coming back for more. After each listen, something new is discovered – a new gem is spotted, a hidden Easter egg is found. For the first time since Clarity, Jimmy Eat World has returned to the intricately planned sound that develops as you go, providing little instant exhilaration, but still managing to produce stealthily catchy hooks. Invented, in all respects, is the epitome of a “grower.”

The closing line of the album, “You don’t get to walk away, walk away now…It’s too late, you can’t walk away, walk away now” rings in your ears while the dreamy, guitar fades out, leaving you yearning for more. “Mixtape” is a perfect way to close the album and can already be considered one of Jimmy Eat World’s best, matching the caliber of past closers “23” and “Goodbye Sky Harbor”. For all intents and purposes, the closing line speaks the truth. You really can’t walk away from Invented.

While some things may never change, your first impression of Invented will most definitely change after repeated listens. Jimmy Eat World has indeed changed, almost matured in a way, and invites you to step in and be a part of that change.