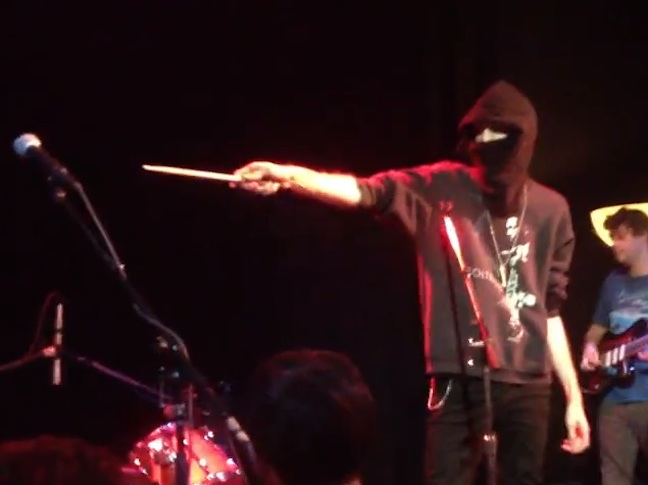 Fans of Deerhunter/Atlas Sound frontman Bradford Cox were “treated” to something “special” during his stop at First Avenue in Minneapolis, MN a few nights ago: a one-hour endlessly-morphing rendition of “My Sharona“ by The Knack. There are certain things an Atlas Sound fan expects when heading to a show, but I imagine 60 minutes of “My Sharona” falls somewhere between “an actual car-burning, window-smashing riot” and “David Lee Roth on vocals” on the list of expectations. (The only thing comparable is showing up for a G.G. Allin gig, only to find yourself listening to acoustic covers of Jackson Browne tunes and, more infuriatingly, uncovered in feces/blood/urine/semen.)

A unique situation for fans to be in, but not without precedent. Spinning the wayback machine all the way to 1965, a crowd of genteel folk fans found themselves on the receiving end of Robert Zimmerman’s distortion pedal, prompting shouts of “Judas!” and mercurial responses from the artist in question, delivered in his trademark drawling mumble: “I don’t believe you.”

Without attempting to make more than is actually there out of Cox’s statements aligning him with punk, the question is whether or not the artist “owes” the paying customers a coherent show in exchange for their time, attention, and possibly most important, money.

Punk was usually adversarial, but then again, so was the customer base. In exchange for not much money, punk fans got to beat up on each other (and occasionally, the artists) to the accompaniment of speedy, unschooled guitar rock. Also included in this exchange of money/blows was the possibility of exchanging invective/spit. Give-and-take. Fair play.

The post-punk world gave us Suicide and the Jesus and Mary Chain, both of whom infuriated customers with antagonistic and extremely noisy sets. Of course, both bands being new to a scene that didn’t even exist yet, it’s tough to claim that they screwed over the paying customers. Until these bands had a few dozen gigs under their belts, no one really knew what to expect.

The JAMC hid behind sunglasses and an opaque wall of feedback, deliberately disengaged from the audience and doing such “fun” things as playing the same half-finished song multiple times within the same half-hour. Suicide would engage the audience, but in a directly abrasive way. As the drum machine (set to “minimal”) pummeled the crowd, Alan Vega would take the show to the crowd, whether said crowd wanted the show taken to them. Sunglasses were also involved. Unsuspecting “fans” often found themselves face-to-face with Vega’s intimidating visage as it hurled “lyrics” at them. (At least up until the microphone is stolen, as it is in the clip here. Crowd turns on band. Band turned on crowd roughly 23 minutes ago.)

Cox’s situation isn’t exactly the same thing. No one’s truly expecting an Atlas Sound tour to feature huge amounts of audience trolling. At least, they weren’t before this. Now, every date past the Minneapolis gig is a crapshoot. Will you be getting a full show, filled with choice cuts from the new album and an entertaining crawl through the back catalog? Or will you find yourself listening to an aggressive epic-length exploration of Brownsville Station’s “Smoking in the Boys Room”? At this point the ticket price becomes a wager. Obviously not the prime situation for fans (much less promoters and venue owners).

There’s a bit of precedence for elaborate audience trolling as well. None other than venerated altrock institution Yo La Tengo once managed to turn the audience against it with its onstage antics. One tour featured a sort of sweepstakes wheel that audience members could spin to select what the band would be playing that night. Hidden among the more audience-pleasing selections was the unexpected: a Seinfeld episode.

A retroactively unlucky fan spun the wheel and set in motion one of the more bizarre moments in concert history. Yo La Tengo proceeded to act out the entire “Chinese Restaurant” episode of Seinfeld, much to the fans’ growing dismay. Of course, this was somewhat mitigated by the fact that the band played a full set of music afterward, but at the point that the episode was in play, There Was No Way of Knowing That. Fortunately, Yo La Tengo fans aren’t the rioting type, so the venue remained intact and consequently, a part of music history.

But Cox’s “stunt” (which doesn’t really seem to fit the descriptor) was in response to (there’s really no other word for it) heckling. Some audience member kept shouting a request for “My Sharona”. And Cox obliged. With maximum hostility. It’s one thing to attack the heckler. It’s quite another to punish the whole class for one person’s insubordination.

Of course, it can be argued (and I’m arguing it) that the artist doesn’t really owe the audience anything. Cox’s fans still got a show, even though that show was largely dependent on improvising the everliving hell out of a 4 minute Knack tune. This isn’t the same thing as the band showing up for two songs before deciding the monitors are crap or the guitarist is too drunk/high/nonexistent and then leaving the stage in a rather undignified huff, subjecting the venue to the (usually) destructive acts of frustrated patrons.

I don’t think the artist owes his or her fans anything beyond artistic expression in exchange for money when it comes to concerts. And I say this as a guy buying tickets, rather than an artist. Without meandering down pathways littered with words “muse” or “chasing the artistic dragon” (I totally made that last one up), I think in order for the artist to get the most out of themselves, this sort of implosion is occasionally necessary. Small comfort for paying fans, I’m sure, but in the long run, it will probably be rewarded with an explosion of output, often in unexpected directions. [OFFER NOT GUARANTEED. VOID WHERE PROHIBITED.]

The early adversarial days of punk rock and post-punk were necessities. The artists were in uncharted territory and determined to attack anything that resembled the complacency of the mainstream. It’s not as if that complacency has gone away. To stay on the edge, artists need to continually push the mass towards the center, leaving the alternate routes free of comfort. Cox dragging an entire crowd into a vindictive pile-on-by-proxy to deal with a solitary heckler feels like overkill, but being an artist means never half-assing it.

FUN FACT: Quentin Tarantino originally planned to use My Sharona to soundtrack the memorable pawn shop basement rape scene in Pulp Fiction, but the rights holders felt more comfortable with Winona Ryder dancing around with a Pringles can. Our loss. Tarantino noted that “My Sharona” has “a great butt-fucking beat.”

SPEAKING OF RE-PURPOSING MY SHARONA:

Here’s Richard Scanty, aka Scanty Sandwich, building a Big Beat monster out of a familiar drum loop. One of the also-rans of the Brighton scene, Richard Scanty opened for Fatboy Slim in Denver (with yours truly in attendance) and tore the roof off the place, at one point juggling two copies of Hardfloor’s acid house classic, “Acperience“. Never mind the fact that many talented people can juggle tracks on the ones-and-twos and instead marvel at the fact that this man, clad in a t-shirt I’d still love to buy that read “Born Scanty,” had two (2)[!!!] copies of the track on wax!