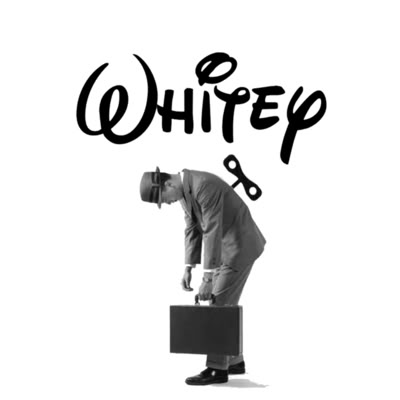 The first time I heard Whitey, I had recently immigrated to the US to escape the violence of my ‘home country’ by becoming an increasingly violent cabdriver in my new ‘country’…

Whitey. The name might ring a bell. Whitey Bulger, mobster. No relation. Whitey Ford, Hall of Fame pitcher. Enough wrong turns via the Google and, god forbid, you might find yourself listening to Everlast’s mook balladry.

These guys are not our guy. This particular Whitey is London native and a purveyor of a distinctive brand of electro-rock, one that dispenses with all the cliches that make electro-rock both easily identifiable and easily ignored. Whitey is a street-smart malcontent who still manages to wears his heart on his sleeve. And no matter how many times life knocks it off, he always stops to dust it off, straighten it out and carefully pin it right back on. It’s an act of defiance that goes hand-in-hand with his caustic tongue and eternal rejection of the status quo. Though his career has spanned nearly a decade, until recently, his output was limited to two albums, with two potential albums having been a.) leaked and subsequently scrapped and b.) scrapped and remade.

But you do know Whitey even if think you don’t. Here’s 22 million reason why:

If that’s not enough, Whitey’s music has appeared on the Gran Tourismo 5 soundtrack, as well as such notable TV shows as The Sopranos, Entourage and House. He’s done remixes for Bloc Party, Cut Copy, Soulwax and Kylie Minogue. You’ve heard Whitey even if you’ve never listened to Whitey. Here’s some listening to get you started:

THE LIGHT AT THE END OF THE TUNNEL IS A TRAIN

Whitey debuted with The Light at the End of the Tunnel is a Train, hitting the UK in 2004 and following up in the US in 2006 on Dim Mak Records. Pre-dating the electro-rock explosion by a few years, TLATEOFTTIAT showcases Whitey’s knack for banging out memorable tunes as well as his unique lyrical sensibilities, which combine healthy doses of world-weary cynicism with the bleeding heart of a never-say-die romantic. Much like Raymond Chandler’s iconic Philip Marlowe, the traits are complementary. The cynicism keeps him from being burned by the heartless while the romanticism inspires him to press forward.

The fatalism of the album title informs about half the songs, especially “Can’t Go Out, Can’t Stay In” and the title track. The cynicism pushes “Y.U.H.2.B.M.2” and “Halfway Gone” into darker territory than the music itself would suggest. It’s never simple cynicism for its own sake, but rather just an undeniable aspect of the whole, urged on by the restlessness of a heart and a mind that won’t stop wanting what they want, no matter what obstacles the world erects.

The music itself alternates between distorted electro-rock dustups and slower, bleaker pieces composed of minor chords and evocative noises. The title track throws Hawaiian balladry into the mix, along with the crackle of old vinyl and Lynchian tones of industrial doom but somehow still ends up a beautiful heartbreaker fit for slow dancing. “A Walk in the Dark” starts out with a menacing, low-slung buzz, strutting along until the 4 minute mark, where it dies off completely before returning as a low-key acoustic reprise, altering the tone from “threatening” to the “not-quite-benign tearful apologetics of an abusive lover.” A remarkable feat at twice the length, but Whitey pulls it off in slightly over 5 minutes.

Whitey’s follow-up was supposed to be Great Shakes. Due to be released in 2007, the promo version was leaked by someone on the US side of the music press. Once Whitey saw the album had been downloaded “10 to 12,000 times,” Great Shakes was pulled. In response to this, Whitey originally planned to release an album entitled Stay on the Outside, composed of reworked Great Shakes material and other originals.

Despite his solid debut and a load of fans constantly shouting “Genius!” at anyone who would listen (I’m one of them), Whitey found himself with some half-finished, half-leaked albums and no distributor. While fans bided their time at Youtube, a frustrated Whitey continued to crank out music and stick it in the vaults between trips to the States. Finally, in 2010, Whitey released a brand new album, Canned Laughter. What was originally intended to be a mix of Great Shakes reworks and originals morphed into an entirely new album, following the blueprint set down by TLATEOTTIAT, but taking an altogether darker path. 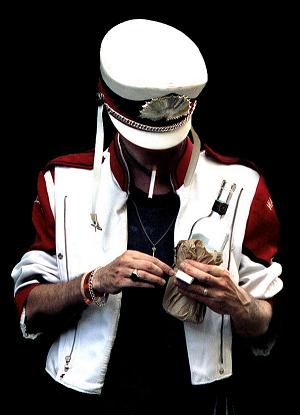 “The world is fucked,” Canned Laughter announces, as the narrator mounts a bold attempt to un-fuck it. Whitey rails against those who have remade the world in their own corrupted image while directing slightly-less-venomous tones at those treading the well-worn path of complacency.

Whitey’s well-directed cynicism is front-and-center during this 10-song set and a palpable sense of angry disgust runs through tracks like “Liars, Vipers, Jokes and Fakes” and “Times Up.” The heartbroken romantic remains but shifts into “wallflower mode.” It’s not all damaged psyches and bitterness, though. “Count Those Freaks” wryly updates “get off my lawn” for the club scene and “The Up Sound for Down People” celebrates “gutter aristocracy.” And if anyone was looking for PiL to update “This Is Not a Love Song,” “I Had a Wonderful Night (It Just Wasn’t This One)” hits all the right sentiments, pinning the heartfelt-in-the-worst-way lyrics to what would be a mawkish ballad if it wasn’t for the layer of acid coating the surface.

Whitey takes care to never let the message get in the way of the music. The tunes convey his anger and frustration without resorting to the easy shorthand of aggro guitar strafing or head-punching beats. Instead, Whitey lets little touches do the heavy lifting, like the ominous industrial noise that surrounds “Dinosaur” or the tortured calliope of “Send in the Clowns.” “Liars, Vipers, Jokes and Fakes” kicks off with (of all things) the good-time vibes of a Caribbean cruise, sporting an absurdly cheery calypso beat while the lyrics head in another direction entirely.

Taking albums out of order is seldom a good idea. The great news is that Great Shakes is no longer a “lost” album. Spread across two volumes, Great Shakes is Whitey’s strongest set of tunes. Taking these tracks off the market must have killed him.

“Cigarette.” The previously mentioned “Wrap It Up.” “Never Enough.” “G.I.R.L.” “Stay on the Outside.” “Do the Nothing.” “Individuals.” “The Gutter.” “Full of Dust.” All killer cuts. All endlessly hummable. All shot through with quotable lyrics. The upbeat tracks flat-out rock. The downbeat tracks punch you right in throat. Great Shakes makes perfect sense in its original setting as the album bridging the gap between his audacious debut and the unnerving Canned Laughter. The promise of TLATEOTTIAT is fulfilled completely.

[Here’s one of my all-time favorite Whitey tracks, coupled with my very favorite (and fan-made) video. The looping animation is a half-assed inside joke. Short story short: Whitey once threatened to ban people who used “LOL” or “OMG”, etc. from his MySpace page. TROLOLOLOL.]

The rhetorical question remains: would Canned Laughter be as resolutely dark if Great Shakes had been released as planned? It’s hard to see how it would. Most likely it would have been a bit more balanced, with a little more daylight breaking through the clouds. Life informs art and Whitey’s experiences during the long lapse between official releases were mostly unpleasant. Make no mistake, Canned Laughter is still a killer album but Great Shakes is a much more complete package.

So, how does someone with as much talent as Whitey end up in limbo? How can someone whose music has been licensed by Grand Theft Auto and The Sopranos fall into the cracks? How can an artist who crafts immaculate hooks without sacrificing intelligence find himself “unmarketable,” or at the very least, “not marketable enough?”

All we’re left with is the vague statement that Whitey’s self-titled followup to Canned Laughter will (most likely) be released on Dim Mak at some unspecified date in the future. That, and a demo reel of sorts over at Youtube. The very promising career that began with The Light at the End of the Tunnel is a Train looks to be coming to an end, having been waylaid by the Great Shakes fiasco. It’s tough to build momentum when the situation insists on remaining out of your hands.

Whitey has intimated that this upcoming album may likely be his last. Pushing boulders uphill against the content firehose that is the internet takes its toll. What’s left of his creative energy is currently directed towards work on film soundtracks. A few trips to L.A. (including one where he met my dad!*) have at least given him another creative outlet, even if it means abandoning the Whitey brand.

[*This is the most inside of inside jokes. If Whitey reads this, he’ll laugh, and if so, I’m happy with that. If pressed, I’ll explain, because nothing makes jokes funnier than long explanations.]

That’s tough news to take as a fan, much less as an artist. The upside is that Great Shakes has finally seen the light of day and, if his Bandcamp offerings drum up enough sales, he’ll possibly be able to tour in support of the new album. If it ends up being Whitey’s farewell tour, so be it. Many artists have left the field for a multitude of reasons, but very few have left behind such a strong body of work. I’m hoping this isn’t the end, but if it is, Whitey’s leaving at the top of his game.

[One final track for you. If I’m called upon to offer up a requiem for Whitey, I can’t think of one more suited for the job than “Made of Night” which, at this point, isn’t available anywhere (unless you can find the nearly non-existent vinyl release and hope that it’s in NM condition). This is (still) my favorite Whitey track and one that I spent nearly an hour straight listening to after I stumbled across it the first time.]

Whitey is offering all of his previous releases with appended bonus tracks over at Bandcamp. Do head there and check them out. The Light at the End of the Tunnel is a Train features six (6!) additional tracks. Great Shakes Vol. 1 and Vol. 2 offer up 21 tracks between them, several of which have either a.) never been released or b.) never been released legitimately. At some point in the near future, Canned Laughter will be re-released with 4 additional tracks. Open up your ears (and hopefully, wallets) and help Whitey get a leg up in society for once. (Broad authorial wink.)