Or, Why Johnny Can’t Spell without Abusing His Caps Lock 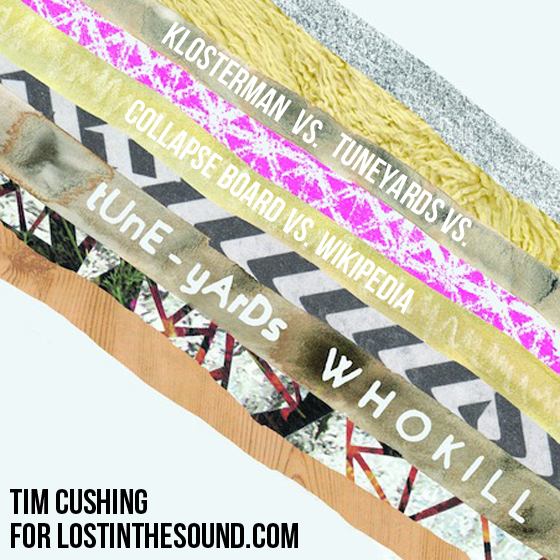 Very recently mostly-esteemed music critic Chuck Klosterman took aim at  tUnE-yArDs and the zeitgeist in general, cranking out an oddly restrained character assassination piece entitled “The Pitfalls of Indie Fame.” The central point of the article, that no one’s going to be listening to Tune-yards (I won’t be abusing my Shift key, if you don’t mind) a year from now, managed to get drowned out by the half-hearted bashing and the general feeling that Klosterman couldn’t even muster up the enthusiasm to truly take Tune-yards for a one-way ride out to an abandoned lot to bury it properly.

If this is Klosterman’s idea of “assassination,”, it’s not unlike attempting to off someone with a Nerf bat. Possible, yes. But man, your heart’s got to be in it. Chuck’s isn’t. Deadlier character assassination pieces usually don’t couch themselves in softened language or freely admit their ignorance of the subject matter. Klosterman does both, admitting he’s only listened to the album (w h o k i l l, henceforth referred to as “whokill,” [if referred to at all]) once and throwing around qualifiers like “suppose” and “possibly” and etc. to further hedge his hazy bets.

Scott Creney at Australian music blog Collapse Board rightly took Klosterman’s post to task, mocking the general half-assedness of the attack while also pointing out a grim undercurrent of sexism underlying Klosterman’s piece. Creney’s sentence-by-sentence breakdown of Klosterman’s article doesn’t get much better than this (shame it’s on page 1 of a 4-page post, but these things happen…)

I’m not really in a position to argue for (or against) the merits of tUnE-yArDs, simply because I’ve barely listened to w h o k i l l. Had it not won the Pazz & Jop poll, I might not have listened to it at all.

With all these disclaimers, I’m starting to wonder why Chuck bothered writing this fucking article in the first place.

[Full disclosure: I, like Klosterman, have barely listened to Tune-yards since being pointed in their/her direction by another post at Collapse Board (dealing with a genre called “Clank”). I gave Tune-yards a good, solid chance. I listened to one track (which I didn’t care for) and sought out a few more (at the greatest music site in the world — Youtube) before coming to the conclusion that this was Not For Me.

However, (and here’s a statement that will pain Scott Creney greatly) they do sound like the sort of thing a certain ex-girlfriend of mine would have enjoyed. Between the neo-hippie trappings, the world music beats and the goddamn ukulele, this would be right up her alley.

The closest I’ve been to this alley full of neo-hippies and world beats is attending shows by Banco de Gaia and Children of the Bong and finding myself attempting to enjoy some sequencer twiddling and sample firing while being surrounded by exactly the sort of neo-hippies I normally avoid, thus relegating me to spending the rest of my evening glaring darkly at the heavily-scented (and sandaled) crowd, all of whom were busily harshing my mellow by so very clearly enjoying theirs.]

If Creney peaks early with his dismantling, the same can be said for Klosterman’s kid-glove hit piece. The most interesting of his listed rationalizations is his first one, from which some sort of sexism can be inferred (should it not exist already), but more bizarrely a claim is made about Tune-yards’ Wikipedia entry’s odd lack of female pronouns.

1. tUnE-yArDs is essentially one person, a somewhat androgynous American woman named Merrill Garbus. This is her second album. I get the sense that asexuality is part of her hippie aesthetic, because I just looked at the tUnE-yArDs Wikipedia page and noticed that the wiki writer put a lot of effort into never using gender-specific pronouns.

For someone (or more likely, a group of someones) to have put together a Wikipedia entry in this fashion would be extremely odd, seeing as Wiki’s relentless and joyless enforcers don’t allow such non-gender-specific dickery. Assuming Merrill Garbus isn’t updating her own Wikipedia page (clearly Against The Rules), then who out there in the internet  would feel Garbus needed to rendered completely sexless for posterity?

The answer is: no one.

The language on the Tune-yards Wikipedia page is no more stilted than anything else clearly written by fans and rewritten by academics (or aspiring comment section mods). There are two distinct “hers” on the page and it doesn’t seem like more are needed.

My first thought was that the page had been altered since Klosterman’s piece ran. Nope, nothing there. In fact, going all the way back to the initial entry, one can find a “her” placed right in the middle of a sentence where one would reasonably expect a pronoun to be used:

In July, 2009 it was revealed that Tune-Yards had signed to the prestigious British label, 4AD and would release a full release of her debut record ”Bird-Brains” on November 16, 2009.

Further research shows that, while various adjustments and expansions have been made, the removal of feminine pronouns wasn’t one of them. What it DOES show in the history is, however, somewhat amusing. Well before Tune-yards was showing up on the radar, certain meandering Youtube commenters were rewriting history in their own image. This from January 17, 2010:

There’s plenty more hate (Origin = [[New England]], [[United States]] and needs to go back there) and the deletion of someone’s full-scale fan-blog-in-progress, but the real comedy lies within the endless battle between the contributors and the mods over the usage of excess spacing (w h o k i l l) and randomly capitalized letters, which commenced on May 4th (moved Tune-Yards to TUnE-YaRdS: The preferred spelling popular usage, in references, and by the subject itself) and raged on into history, with clashes on May 18th, May 26th and 27th. A few minor skirmishes resulted in a January 1st proclamation (apparently knowledge never sleeps/parties/gets hungover) that “normal spelling and capitalization rules would apply, rather than the artist’s choice” (this being Wikipedia, not wiKi-PeDia, after all). The proclamation was promptly ignored, leading up to one of the finest damning sentences composed on a Wikipedia history page:

Wikipedia is an encyclopedia, not a hipster music website. write as you would pronounce, so who kill (dropping the caps is fine) and Tune-Yards (not that eyesore she uses)

So, while Tune-yards’ fans may be undyingly protective of their odd spacing and StudlyCaps, they seem less than concerned with shrouding Merrill Garbus’ sexuality from bearded music critics out there in internet-land (more specifically — Grantland).

Beyond the thing that isn’t actually happening at Wikipedia, what other reasons does Klosterman offer in support of his “here today, mocked tomorrow” hypothesis?

The only thing I knew was that the words “Tune Yards” were spelled “tUnE-yArDs,” which seemed like reason enough to ignore it (not a good reason, but a reason nonetheless).

It’s not a “good” reason, but it’s certainly acceptable. After all, I’ll never be able to listen to Vampire Weekend after seeing this photo of them playing live. Superficial, yes. But COME ON.

Garbus was formerly employed as a puppeteer, if that sort of thing matters to you.

Sadly, I think it does. If the words “puppeteer” and “ukulele player” are not followed shortly by “children’s television host,” then the world has gone off its moorings and needs a hard reset.

w h o k i l l is not avant-garde, but it is experimental.

And has extra spaces. Let’s not forget about that. See also: reasons to ignore it (above).

But all sneering punctiliousness aside, Klosterman does have a point: Tune-yards is altogether Too Much. It won’t last because it can’t possibly last. It all carries the heavy scent of pretentiousness and affectation even if none actually exists. The odd vocalizing. The hippie-meets-industrial aesthetic. The random capitalization and kerning issues. The goddamn ukulele.

Klosterman cites Arrested Development as a comparable musical entity, one critically adored and hailed as the savior of rap from the thugs, but just try listening to them now without cringing a bit. Try just looking at the album cover without being tempted to avert your eyes and shout , “What in the hell is that? An interpretative dance troupe without a bus pass? An umbrella??!??!?”

You can have a few of these elements and still be ok. But concentrated amounts of “left field” has a strange way of making you an unwelcome house guest in a very short matter of time. The further out the artist is, the sooner they get dropped as former fans make their way back to more centrally-located amusements.