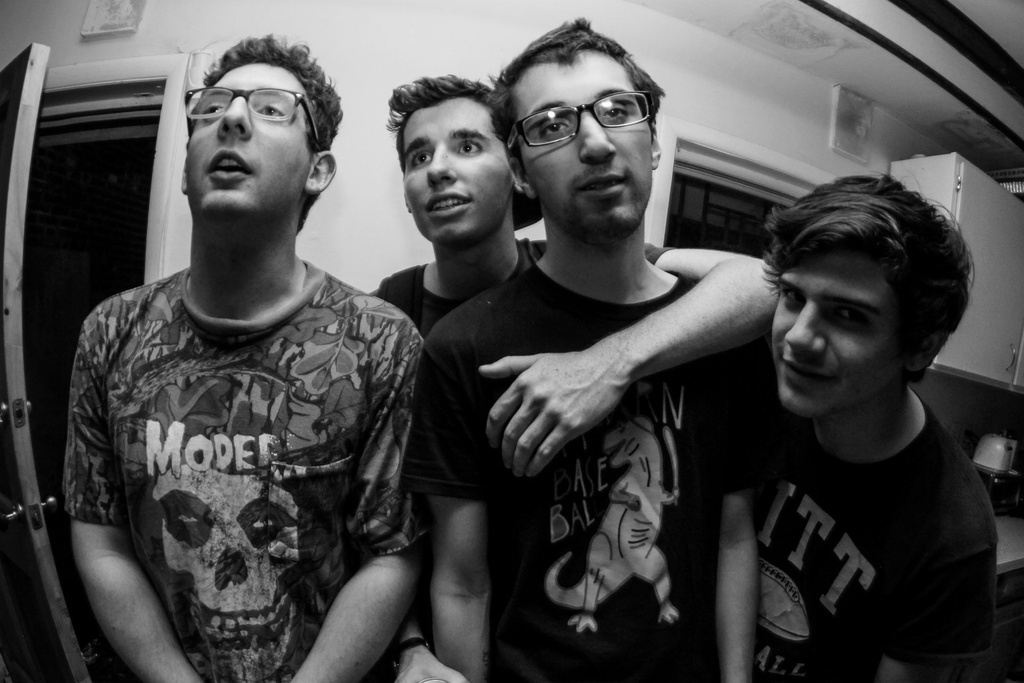 Philadelphian four piece emo-punk outfit Marietta have recently released their debut album summer death. I got the chance to speak to the band about the recording process of their new record, Philadelphia’s music scene, the media’s favourite buzzword “emo revival” and more. Read the full interview below, pick up their discography digitally on their Bandcamp, and pre-order their debut full length on vinyl from Soft Speak Records.

First off can you introduce yourself, the rest of the band and the respective instruments that you all play please?

So your Demo was released nearly two years ago now, and you’ve just released your debut album summer death, how has the band evolved since your beginnings?

When we started this band, it was just Ethan and I writing songs together – shortly thereafter, Andrew came along and wanted to play drums. We were like that’s pretty tight. Originally, we were writing songs without a bass, not to mention we had both just started using alternate tunings. I think the biggest differences between our early stuff and summer death are the technicality of the parts. We’ve gotten better at playing and we’ve also gotten better at adding dynamics to songs that we wouldn’t have thought of before.


I’ve been streaming the new album quite a bit, and everything just seems to fit together so well; the crescendos, the twinkly melodies, the pulsating drums, and that perfect transition between soft-spoken and wailing vocals. How do your songs come together? Do the instrumentals or lyrics come first?

Ethan or I will write a song in its entirety on guitar. Then we’ll show the song to the rest of the band, and we bang it out together. Usually vocals are put in last.

Speaking of your debut release, you recorded it in a variety of different locations, why was the process like that?

We recorded the record all over the place – it was some pretty DIY shit. Our friend Eric Muth, to whom most of the credit goes to for how great the record sounds, hooked us up with East Room Recordings – where Eric recorded drums. Then we just divided up the recording amongst places we had access to – some of it in our (Ethan and I) house, some of it at Ben’s old house (Michael Jordan house), and some at Drexel’s recording studios.


I noticed that all the proceeds from the vinyl pressing of the new album go towards the Cystic Fibrosis Foundation, and I just want to say that’s awesome. Was there a reason for this specific foundation?

That idea is all Michael from Soft Speak Records. I’m not fully sure why he chose that foundation, I believe that his college roommate or friend suffers from Cystic Fibrosis; regardless, I commend him for his charity. He’s a cool-ass dude.

There seems to be quite a few emotive bands coming out of Philadelphia right now and in 2012 you guys did a split with Modern Baseball titled Couples Therapy. Is there a strong community feel between all the bands?

Absolutely. If you’re in a band and you play in this particular scene in Philly, chances are we’re already friends. I want to be clear on something, though – you don’t even have to be in a band to be friends with everyone in the scene. If you engage with the scene in any way, whether it be going to shows, making art, filming, photographing, etc. you are part of the scene and there is a respect and care for one another that you can’t find in many other circles. I think everyone in the scene would agree that we’re all willing to help one another out, and we’re all stoked on what everybody’s doing.


Do you think there is an “emo revival” or do you believe you are just apart of a third wave of emo bands?

Third wave, fourth wave, fifth wave; some sort of wave. The whole emo revival thing is just music journalists finally paying attention to a genre of music that was born, died, was buried, and then resurrected from the grave, only to be shot point blank with a shot gun. I think that Marietta is a part of a newer wave of emo music that a lot of people have coined “twinkle.” Emo has grown, mutated, and morphed into so many different things that are so far apart musically but remain unified by the genre- so to answer your question – yes, we are the step-sons of bands like Algernon Cadwallader, Snowing, and Grown Ups.

On the topic of genres, which bands did you grow up listening to, and how did they influence your music?

Personally, my tastes went all over the damn place throughout middle school, high school, and even college. I had a big folk punk phase with bands like Defiance, Ohio and Against Me! Then I became interested in heavy shit like The Jonbenét and Daughters. Then I was really into indie music like The Microphones and Sufjan Stevens; after that I got into new emo through bands like Algernon, Merchant Ships, Age Sixteen, etc. I can’t say for sure how any of these bands influenced me because I would say that any music I’ve listened to, ever-including Linkin Park in 4th grade, has influenced the way I write songs.

Alright, kind of off topic, but are you excited about the new Star Wars movies and perhaps seeing Dantooine on the big screen?

Shit, this is definitely Ethan’s territory. He LOVES Star Wars. I’m sure he’s half excited, half skeptical for how the new star wars will turn out.

Any last words, plans for the future, or something you want to say to your fans?

Thanks y’all! The response to our album so far has been really incredible. We plan on going on tour this winter with State Lines, Old Gray and a ton of other cool bands! Hopefully within the next few months we’ll get to work on something new! Really though – our fans rule. I can’t stress enough how important it is to support local music/local scenes. The fact that kids actually get stoked on us is the coolest thing ever. You guys are cool. You rock.