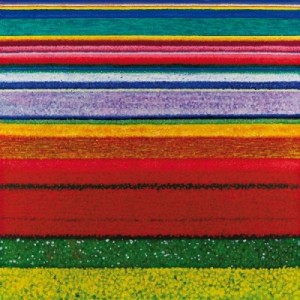 Recorded to tape in a church sans-computers and fancy recording booths is Dallas Green’s third studio album “Little Hell”, a beautiful record that changes up Green’s pure man-and-guitar sound, yet still maintains the unique City and Colour feel that listeners have grown to love.

Since his debut, the singer-songwriter has grown both musically and creatively. Little Hell is a true indicator of said growth; mixing up the track list with full band rock songs, trademark acoustic songs, and introducing synths and strings to diversify the instrumentals. It’s difficult to describe Little Hell accurately, as it doesn’t fit into one specific genre like Bring Me Your Love may have; however, each song is sung sincerely, and crafted with the utmost care.

The signature minimalist acoustic sound is not all lost in Little Hell, as “Silver and Gold” and “Northern Wind” primarily consist of just the man and his guitar, with the latter being a heart-on-sleeve song taking roots fromBring Me Your Love’s “The Girl”.

“Whether a natural disaster ripped it from it’s foundation
Or an economic tragedy tore apart it’s family
They’re all empty.”

“Natural Disaster” is a full band song that tackles the problems in our world, created by “natural disaster(s)” and “economic traged(ies)”. Given the subject, it’s surprising this song does not drip with melancholy. Regardless, this imagery-ridden track is one of Little Hell’s standouts.

Title track “Little Hell” begins with a riff bearing slight resemblance to those of Death Cab for Cutie. “Will we get out of this little hell?” is a stunning end to the song with Green’s smooth, effortless vocals and slow tempo band instrumental.

“Weightless” is a departure from Green’s more acoustic tracks, introducing an indie rock feel driven by the drumbeat rather than guitar. Interestingly, it works. Green’s distinct voice does not lose its clarity when singing loudly and contrasts unusually well with the dirty, flange-y guitar riffs.

Little Hell is by all means an emotional ride. “Hope For Now” concludes the record, beginning with a soft acoustic sound before the lyrics crescendo the song into a full band, deep guitar blasting second half with Green replying to “If I could sing one song and it could save someone’s life”, chanting “Then I would sing, all that I could sing”. This is a song that you truly feel.

Little Hell is not quite a complete transformation of one-man band City and Colour, but it is a work that reflects the change Dallas Green has gone through in his life since Sometimes. The fact Little Hell did not inherit an acoustic sound may disappoint some; however, Green is at a new stage in his career, in his life, and it is no surprise that his music changes accordingly. What hasn’t changed though, is Green’s second-to-none voice and musical talent that merits him to being one of the best singer-songwriters alive.