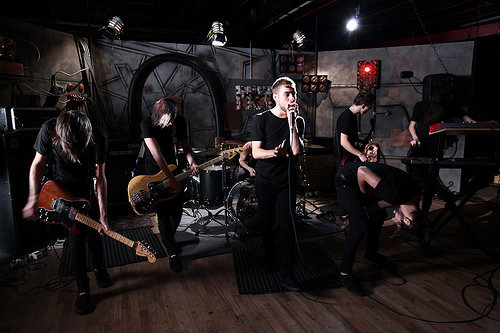 American metalcore band Woe, Is Me has announced the loss of three of their members; Michael Bohn (Screamed Vocals), Ben Ferris (Keyboard/Vocals) and Cory Ferris (Bass), due to differences within the band. The former members have released a statement regarding their departure from the band, which you can read below:

“It doesn’t come with any ease to announce, but the three of us have left Woe, is me.

Our differences were just too vast on so many levels: Musical, personal/moral, and professional/business.
It came to a point where we could either continue on the path they saw fit, or we could create our own path and find happiness in our own ways.

We have nothing but gratitude for all of the fans. Every handshake, high-five, hug, pat on the back, and kind word from you guys and gals means the absolute world to us.

When one door closes, another opens: and we can’t wait to see what’s on the other side of this new door.

Hope to see you on the road soon.

Woe, Is Me has already announced replacements via Facebook. The former members roles’ will be filled by Doriano Magliano of That’s Outrageous! and Brian Medley. You can read the band’s statement below:

“What you’ve heard is true- but it’s something that we’ve prepared for, addressed, & already handled. Trust us, when we say ‘everything is going to be just fine’ ( ; Oh, & we’ll be seeing you in two days. So be ready ( ; @WoeIsAustin @andrewpaiano @woeiskevin @hance_ @dorianomagliano & @briannmedley

P.s: u[s] breaking up, is out of the question. Every tour, & every plan will be followed through with full heart. We’ll be releasing a video press release tomorrow to fill everyone in on things to come. #neverstronger