We recently got a chance to speak to Gabe Chilarello, lead vocals of Sink Tapes, an indie band based out of the Asbury area of New Jersey. We were able to learn a lot about the background of the band, their first album, Same Strange Dream, their upcoming sophomore album, what they’re all about, and what they’re about to bring to the plate. 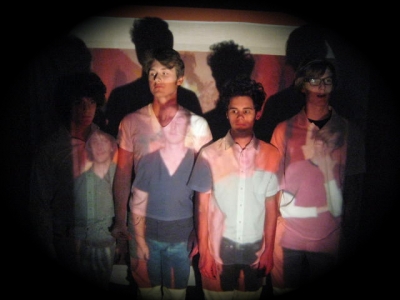 LitS: So, Sink Tapes, many people are curious as to what the origin of your band name is. Could you tell us?

Sink Tapes: It’s probably better left unsaid. It’s kind of one of those things that no one will understand. It’s a name we decided to go with because we had already been called a few other things and we were forced to figure out what to call ourselves, and something just happened where we decided the name Sink Tapes. There’s no meaning to it, but we had people telling us we should be “sync” tapes, but we like NOT making sense so it makes it fun, just like how our songs are. Just fun.

LitS: When did Sink Tapes first form as a band?

Sink Tapes: We probably started playing about two summers ago as Sink Tapes with our original songs. We first met through friends; none of us go to the same schools and we just started seeing each other at shows in the Asbury area so we decided to jam together on covers and what not. Eventually, we played a backyard show with a few bands and since then we just kept playing. I don’t think we meant it to happen, but it slowly got serious yet fun, and now we’re working on our second album.

LitS: Are your current members the original members?

Sink Tapes: Yes, it’s just Alex, Ricky, Tom and I, just like it has always been. Alex goes to school in Maryland, which sucks, but whenever he comes home we make it a point to play shows as a four-piece.

LitS: So, when he’s not around, you still perform with just the three of you guys?

Sink Tapes: We don’t prefer to play with just the three of us because with Alex, we have a more complete sound, of course. But over a few months, we relearned how to play our songs as a three piece so we could continue to play while he was in Maryland so we don’t slow down and we’re able to keep process. When he goes to school in the fall, we definitely want to travel there and play a bunch of shows with him in his area. END_OF_DOCUMENT_TOKEN_TO_BE_REPLACED