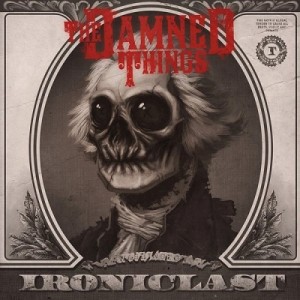 Creating perhaps one of the strangest supergroups this side of Tinted Windows, Keith Buckley of Every Time I Die, Scott Ian and Rob Caggiano of Anthrax, and Joe Trohman and Andy Hurley of Fall Out Boy have joined forces to create The Damned Things. Generating early buzz for their debut, Ironiclast, through their pedigrees and the endlessly entertaining video for first single “We’ve Got A Situation Here” (directed by none other than Dethklok‘s Brendon Small), it appeared that the band was ready to usher in a wave of classic, blues-driven rock. After listening to the album, you’ll know that you want to be swallowed by this wave.

Just as the combination of ETID, Anthrax, and FOB may suggest, great riffs and soaring choruses are the name of the game on Ironiclast, and in these, The Damned Things come through in spades. “Bad Blood” is one such example of this. It starts off with the musical and lyrical dirtiness of Every Time I Die. The pre-chorus, however, serves as a perfect bridge between styles, paving the way for the markedly lighter chorus, castanets in tow, to successfully take control. This integration between the catchy and the heavy is exactly what The Damned Things sought to achieve, and they succeed time and time again.

“Friday Night (Going Down in Flames)” has an immediate momentum that never relents, making it one of the strongest tracks on the album. As radio-friendly as it is, the riff-heavy classic feel is refreshing compared to what pollutes the airwaves today, as is also the case with “We’ve Got A Situation Here.”

Lest listeners tire of this combination, as good as it is, the album changes speeds slightly, starting with “Black Heart,” after which the songs become more distinctly stylized. A more laid-back, swagger-filled song, it emphasizes the blues aspect that the band aimed for, losing none of the quality in doing so. “Little Darling” starts off with a guitar line very reminiscent of Queens of the Stone Age, but by time it reaches the chorus, it has somehow changed into a Coheed and Cambria song. The title track, a jab at today’s scene, is heavy as hell, sounding more like straightforward metal.

Even within these styles however, it is still unquestionably The Damned Things running the show. One album in and they have already carved out a distinct sound of their own, one that is consistently strong and rarely falters in execution. It is only when the band strays too far from their light/heavy balance that the quality suffers. One such example of this is “A Great Reckoning.” While it does have fun lyrics and a catchy chorus, the instrumentation leaves much to be desired. The tambourines and acoustic guitars feel completely out of place and bring down a potentially good song.

Opener “Handbook for the Recently Deceased” suffers similarly. While decent enough in its own right, it errs to the FOB side of the spectrum. Like “A Reckoning” it simply lacks the bite and flair so evident throughout the rest of the album. It also highlights a general weakness of the entire album: the lyrics. Although a couple of songs, the personal closer “The Blues Havin’ Blues” in particular, touch on deeper themes, most have generic lyrics about relationships or having a good time. They don’t drag things down too much, given that the album is more about the music and choruses, but better lyrics wouldn’t have hurt.

Overall, Ironiclast is a fun time from start to finish. The Damned Things may sound strange on paper, but they pull off their odd combination better than most anyone would have expected. In spite of a couple of missteps, the band has delivered a strong debut that deserves commercial recognition and a chance to show off more of their tricks and talent in the future.