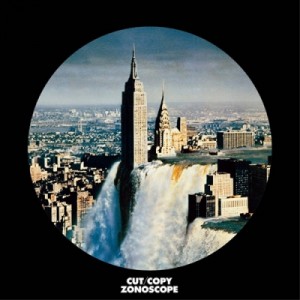 Daft Punk recently rocked movie theaters and headphones with their soundtrack to Tron: Legacy, but there hasn’t been much to keep the dance going since then. Listeners in this plight need only to take a gander at Australia’s Cut Copy for their next dance-rock fix. Their third album, Zonoscope, was released February 15, and when it shines, it shines brightly.

The party starts with the techno opening to “Need You Now”, building up and adding layers of sound until Dan Whitford’s vocals kick in. Though initially slightly off-putting, in this song, he displays a decent range and contributes his own unique part up to the climactic ending. It is a great way to open the album and a display of Cut Copy playing to their strengths.

These strengths shine through for much of the first half of Zonoscope. “Pharoahs & Pyramids” begins with an intriguing synth intro to build anticipation. Slowly, more instruments and layers are added, creating a richly textured musical landscape. As the music swells, it suddenly gives way to a fun, syncopated bridge, eventually erupting into dance nirvana.

“Blink and You’ll Miss a Revolution” is full of musical mischief, with wooden blocks belying the initial bass groove. As the song continues, though, the music evolves, not only by adding more layers, but by changing the placement and instrumentation of these starting musical lines. By the time the slower instrumental “Strange Nostalgia for the Future” kicks in, it is a much-deserved break from the energy-infused first half.

Unfortunately, it is also at this point that the fun begins to wane, as the album is rather front-heavy. Listeners may float along with the stripped down “This is All We’ve Got,” but for the most part, it is a forgettable journey. The same can be said of the overly-long “Hanging Onto Every Heartbeat.”

“Alisa” boasts some delightful synths in the intro and pre-chorus, but these give way to a more basic guitar and drums combination.  The song isn’t bad, and the chorus has a definite energy, but it lacks the spark of earlier tracks.

The party eventually recovers with “Corner in the Sky,” a wonderfully ambient number.  Bolstered by a deep, techno bass, a great pre-chorus synth line, and the explosive chorus, it brings the sound full circle and paves the way for closer “Sun God”. While not a great song, especially vocally and lyrically, it does a good job with winding down for the night, though it does border on the excessive with ten minutes of closing instrumentals.

Cut Copy have definite skills in their musicianship, and their most consistent weakness lies in the vocals and lyrics. Most of the time, Whitford’s voice lacks passion and he slurs his words. It serves a purpose as another instrument to add to the texture, but little more.

The same can be said of the lyrics, which, with the exception of “Corner of the Sky”, rarely rise above a surface depth. This is much more acceptable though, as the words don’t really matter with music so rich.

Zonoscope is exceptional when it plays to Cut Copy’s strengths, but falters when it strays from them. Even so, the excellent highs far outweigh the forgettable, skippable lows. They are talented musicians, but they should stick to what they know best in the future.

Standout Tracks: “Need You Now”, “Pharoahs & Pyramids”, and “Corner of the Sky”