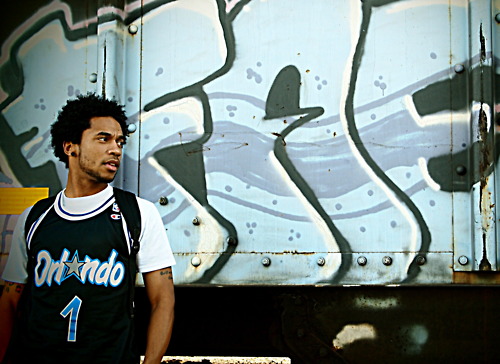 My favorite thing about talking to artists is just hearing how humble they really are and how much work they’re putting in to achieve their dreams. Hard work definitely does pay off. So last week, I was extremely fortunate to speak to an up-and-coming rapper from Virginia named Phil The Thrill, who has been releasing an EP a month for the past five months, garnering attention from XXL Magazine and SmokingSection.com. On October 25th, Phil will be concluding the series with a full-length mixtape entitled Barely Awake, which you can preview here.

Check out my full interview with Phil below.

Phil The Thrill: Crazy, crazy. I mean, they knew it was gonna happen eventually, but it was just all of a sudden it seems like.

Yeah… ah, the man’s a genius. So I hear you’re 22 years old and from Newport News, Virginia, is that correct?

Actually, where have I heard of that place from? Is that…Michael Vick’s hometown?

Phil The Thrill: It’s… pretty scattered. This area is known as Hampton Roads, the 757. I’m not sure how familiar you are with this part of Virginia but Missy‘s from here, Timbaland‘s from here, Pharrell‘s from here,The Clipse are from here. So yeah, we have a pretty crazy rich tradition as far as music goes. It just seems like they’ll move away and you know, it’s hard to really get them back to reach out to artists that are coming up now. But as far as tradition goes, we’re definitely on the map when it comes to music, period. And then 45 minutes up the road is where Trey Songz and Chris Brown are from.

So where did your rapper name, Phil The Thrill, originate?

Phil The Thrill: It’s actually been a name that’s stuck with me. It’s actually been my nickname since I was around twelve years old. I was an athlete playing basketball and football and you know, when little nicknames happen to you when you’re a kid… they’d just be like “Oh, Phil The Thrill!” It sticks and through high school, when everyone would have AIM screennames, I was like lemme use my nickname. It stuck with me then and when I went on to play college basketball, it stuck with me there. So it became my Twitter name and once it sticks, I’m not going to try to change that just because I’m doing music. It’s my nickname and what people know me as. END_OF_DOCUMENT_TOKEN_TO_BE_REPLACED

If blink-182‘s return wasn’t nostalgic enough for you, we now have “The Adventures of Rain Dance Maggie”, the lead single from the Red Hot Chili Peppers‘ new album. I’m With You, out August 30th via Warner Bros. Records, will be the band’s tenth studio album and the first since Californication without John Frusciante on guitar. Nevertheless, Josh Klinghoffer’s guitar lines on the new single carry Frusciante overtones and the entire song sounds like a modern spin on the classic Chili Pepper funk. Welcome back, Chili Peppers.

You can listen to the song after the break, courtesy of KROQ.

END_OF_DOCUMENT_TOKEN_TO_BE_REPLACED

On August 30, the Red Hot Chili Peppers will release their 10th studio album, I’m With You, via Warner Bros. Records. Today, the band released the album’s 14-song tracklist, which you can see below. The album’s lead single and seventh track, “The Adventures of Raindance Maggie”, is set to premiere on July 18th.

According to drummer Chad Smith, the Red Hot Chili Peppers will be releasing their newest album in June of this year. The new album will again be produced by Rick Rubin and will feature new guitarist Josh Klinghoffer insteadof John Frusciante, who is focusing on his solo career.