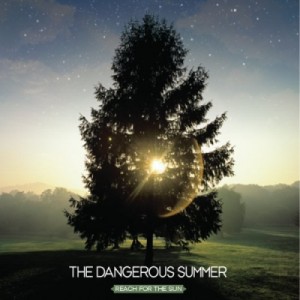 In any lifetime, there are numerous events that can impact a person greatly, for better or for worse. For The Dangerous Summer’s vocalist, AJ Perdomo, choosing to follow his dream and pursue music was one of those life-changing events. Throughout Reach For The Sun, AJ and the rest of the band prove that choosing to stay in music was a great decision, for themselves and for listeners everywhere.

Reach For The Sun, the Maryland band’s first full-length record, is packed with soaring, layered guitars, pulsing drum beats, and strong, emotional vocals. The Dangerous Summer is ready to prove that they are more than just a pop-punk band—they are a band that is here to stay.

Opening track “Where I Want To Be” kicks off the album on a fast pace, something that is quite normal for the band. Every song on the record is bursting with energy, powered by the talents of Tyler Minsberg on the drums. Standout track “Weathered” opens with the familiar intertwining guitars, before being swept away by the crooning of AJ Perdomo. Well-written lines like, “Well I’m an optimist / But only in a perfect world / I think I’m too stained / With all the negativity / From all the people in my way” are littered throughout the record and are driven home by the superb production of Paul Leavitt and songwriting from the band.

Reach For The Sun’s main strength is its ability to connect with all sorts of listeners. AJ Perdomo’s sharp lyrics and powerful delivery have a sort of universal appeal that allows the band to reach through. Guitarist Cody Payne has said, “[Every song on this album] had their own little story in our lives while we were writing the album and seeing it come together in the studio. The album is overall very positive and about real life. AJ covered a lot of different ground – love, life, death, the past, the future…it’s all there.”

One of the only downfalls of the album is that at times, the band seems to be unwilling to move away from their trusty songwriting formula. The songs on the record sound very similar and the range of styles on the record is lacking. But when there is variety, the change is highly noticeable. The slow, thoughtful “Northern Lights” provides a change of pace that is gladly welcomed.

Reach For The Sun is a record that needs to be experienced and not described through words. The powerful vibes that the album gives off makes the album a genuine venture into the lives of band members AJ Perdomo, Cody Payne, Bryan Czap, and Tyler Minsberg. As far as personal albums go, Reach For The Sun is a memorable listen and is worth every second of the 41-minute album.

And who knows, maybe listening to Reach For The Sun will be a life-changing event for you.