The Streets – Computers and Blues 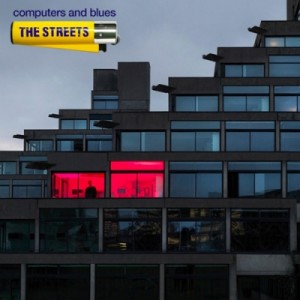 Mike Skinner, rap name The Streets, faced a musical dilemma, but eventually came out on top. His first two albums were quite successful and nearly universally acclaimed. Unfortunately, both of them were about the common experiences in the life of a regular person. With such popularity, one can hardly harvest lyrical material from the same source for later albums.

As such, the two albums that followed didn’t have nearly the impact or the reception that his previous work did. His latest and final album, Computers and Blues, seeks to buck the trend and strike a balance between the two sides of Mike Skinner. All in all, it boils down to his best album in years.

The signature elements of The Streets make a return: the intentionally unpolished laptop-produced music, the unhurried, off-beat rapping, and of course Mike Skinner’s Mockney accent. This time around, he takes his computer beats to a whole new level, incorporating many sounds from the 8-bit era.

This is demonstrated by the opening to “Outside Inside”. The Nintendo-era sounds promptly give way to a Spanish guitar backing the first verse, which sounds odd and hollow until a techno bass fades in beneath it, rendering a sense of completion to the beat. Lyrically, it doesn’t have the deepest content, but a song about getting high does hearken back to the themes that made him popular to begin with, so it does provide a hopeful start.

Unfortunately, the next song is the biggest letdown on the album. “Going through Hell”, has music that just never works for the song, and the lyrics, while meant to be inspiring, come off more as the faux philosophy of his previous album, Everything is Borrowed.

This is deftly overcome by the wondrous “Puzzled by People”. In addition to boasting great beats and some entertaining and clever crossword-based lyrics (“I’m 2 down and you’re 1 across the room/Beginning with I and ending in U/Beginning in my I and ending as an X”), the song hits deep. One can empathize with the feeling of not understanding others, and the simple way he finds meaning in this puzzle is touching.

Skinner implements similar wordplay later on the album in the song “ABC”, in which he attempts to use every letter in sequence as a word, though in that case, it is more of a fun diversion than a serious song.

Compared to his past two albums, Computers and Blues is more personal on the whole.  “Blip on a Screen” strays into new territory for Skinner, with him singing to his unborn child.  “We Can Never Be Friends” is a break up song that stands up well next to his past hit “Dry Your Eyes”. “Trust Me” is a short and sweet song with nice beats and a simple message of unity. The last track, “Lock the Locks”, an ambient song about leaving his life behind, is a perfectly fitting final bow to his career.

Skinner isn’t completely free from his Everything is Borrowed philosophical musings, however. There are a few forgettable songs such as “Those That Don’t Know”, the hiccupping “Soldier”, and “Trying to Kill Me”, one of the only songs that breaks his usually effortless and impressive flow.

Given the turn of his career, some breathed a sigh of relief when Skinner announced that Computer and Blueswould be the last album by The Streets.  Many would rather that he end with mediocrity than continue on a downward path for years. Computers and Blues defies expectations, however, and proves to be a competent end to his career. It doesn’t quite reclaim his former glory, but it’s a good note to leave on.

Standout Tracks: “Puzzled by People”, “Blip on a Screen”, and “We Can Never Be Friends”