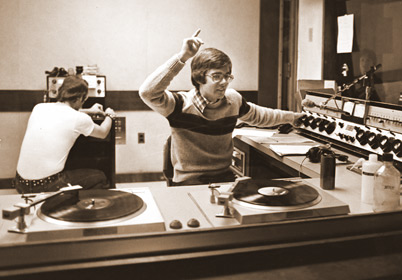 Presented for your consideration today: two fine New Bands whose aural tendencies echo the past, specifically that magical decade or so stretching from 1985-1995, when College Rock was actually a Thing. Good times, those what with talented and possibly drugged up students spinning everything under the sun that would never see the light of day on Top 40 radio.

Jangly arch-country from Camper Van Beethoven rubbing musical elbows with imported British takeover applicants The Charlatans UK (the appended UK gives it away). But first and foremost, atmospheric shoegazer epics drifted across the lower ends of the FM dial, carried by sparse megawattage that nearly allowed the signal to escape the surrounding parking lot.

This was before College Rock morphed into Alternative Rock (aided by MTV), which soon transformed (via the arrival of Nirvana and about a million bandwagon-jumping A&R men) into various shades of grunge, which a half-decade later got drunk and passed out in tattoo shop, awaking only to find itself the inadvertent caretaker of Helmet and Dr. Dre. Once it was discovered that talent skips a generation, this malformed child was christened “Nu-Rock” and abandoned in the care of a million frat boys, each of whom assumed growly yelling was a viable form of artistic expression.

BUT! These two tracks have nothing to do with a decade-long run of strangely earnest guitar wrangling in which louder always = better and melodies were something for the girls to enjoy along with their roofie-laced drinks. These two tracks bring back the “alt” in “altrock,” summoning up the swirling, hazy guitar anti-heroics of a short generation of pedal-pushing geniuses who operated under such unlikely names as My Bloody Valentine, Yo La Tengo, Catherine Wheel and Sonic Youth.

Brooklyn’s Telenovelas manage to conjure Catherine Wheel (or perhaps a noisier House of Love) within moments, cranking out fuzzy, reverberating wall of sound. Once they hit the bridge though, atonal detunings reminiscent of Thurston Moore‘s inspired skronk emerge to color all over the walls. It’s an inviting track that draws the listener in while still keeping its guest’s intentions honest with occasional bursts of face-melting distortion.

Bay Area noisemakers Weekend generate some of the most melodic blasts of hummable white noise ever to hit the internet. There’s a solid rhythm section attempting to pin down the buzzsaw attack. It manages most of the time, drilling the tune deep into your grey matter as a guitar slowly impaling itself on an amp creates the aural equivalent of searing, white-hot liquid steel pouring onto a factory floor, assaulting the listener with waves of heat and light (but, you know, with sound).

The description may sound unpleasant (and unseasonably warm) but in reality, it’s merely a harshly overdriven step or two away from the wet dream of a fading popstar. You might be able to weather the heat, but long after the floor has gone dark and the lights have gone out, the melody will rise unprompted, sending you back to press “play.” Again. And again.