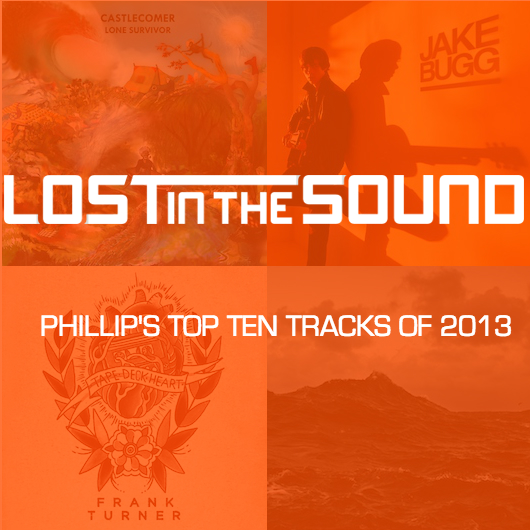 Over the past year, Lost In The Sound has moved in a new direction covering alternative genres and choosing to add focus on lesser known artists. With this in mind however we also continued to cover prominent outfits that we enjoy listening to and supporting. We added punk, metalcore, folk and ambient to our editorial genres to give us a more diverse array allowing us to promote more of our favorite bands and solo projects. With all of these changes we thought it would be much more reasonable to compile ten tracks from each of us reflecting on our favourites from the last twelve months. So, this year, LITS presents fifty tracks in five separate top ten lists. Our fifth and final list in this series is from Phillip Imkamp. Happy holidays to all!

8. Them – Little Green Cars from Absolute Zero
Another band to look out for in 2014, Little Green Cars craft some great harmonies. Although this song moves away from their more acoustic sound, it still has a nice electric guitar feel.

7. Give Me Some Love – We Are Monroe from Volume One
From one of my favorite new bands, their song Give Me Some Love is one of the faster tracks on my list. In this song you are able to hear the amazing vocal range that their lead singer possess, with power and control. A great song on a fantastic EP.

5. Comrade – Volcano Choir from Repave
When hearing that Bon Iver broke up I was extremely upset but when discovering that the former front man, Justin Vernon, has his new project, I felt a little better. Though Volcano Choir may never live up to Bon Iver, it is still great to hear the trademark Vernon falsetto, and Comrade really expresses that. For those of you with Bon Iver withdrawal, I recommend giving this a listen to.

3. Slumville Sunrise – Jake Bugg from Shangri La
After getting the break out recognition that he so thoroughly deserves, Jake Bugg has not slowed down. We were lucky enough to have him release his newest album in November, with Slumville Sunrise being my favorite song from it. It’s classic Jake Bugg, with a smooth guitar, guitar riffs throughout, and a great shouting worthy chorus. With two albums under his belt at such a young age, he’s just going to get bigger and better.

2. Lone Survivor – Castlecomer from Lone Survivor – EP
A personal favorite band that I have been following for the past four years, they finally released their second EP during this past summer, and it did not disappoint. With their perfect harmonies, and acoustic guitar melodies, you can’t go wrong with Lone Survivor.

1. I Forget Where We Were (Live) – Ben Howard from N/A
Finally the one I was most excited about, Ben Howard is one of the best singer songwriters of our current generation. After going on hiatus after winning two Brits, Ben Howard has come back blazing. Though he hasn’t relseased a recording of this song yet, it has been my favorite in every live show he’s played. He has moved away from using an acoustic guitar, and instead has picked up a gritty electric guitar. This combined with his pure passion for the music he makes I can not wait for a new release in early 2014. If the rest of the songs are half as good as I Forget Where We Were then it’s sure to be a classic.