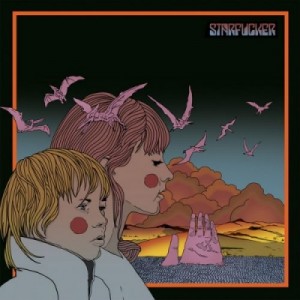 What’s in a name? Unfortunately, a lot; something Portland indie-eletronic rockers Starfucker can certainly attest to. Since forming under the moniker Starfucker, the band has rotated between the more appropriate STRFKR, PYRAMID, and finally, Pyramiddd. What do all of these names have in common? Not very much to be honest, and for that reason, the incredibly erratic name changes have confused fans hoping to catch the band’s stunning live shows. Perhaps on yet another whim, the band finally decided to change back to the notorious Starfucker, keeping STRFKR reserved for all-age venues.

As we all know, there is more to a band than their name, but the hype and notoriety surrounding Starfucker’s choice of names can certainly be accredited as catalysts in the band’s three short and promising years of existence. Reptilians is a capable, ambitious effort to meet the hype and match the expectations of fans after a slightly disappointing debut. Where the self-titled Starfucker was highly inconsistent and spotty, Reptilians is a conscious effort by the band to produce the solid pop songs that they always had the potential to.

Opening track “Born” blurs genres, beginning the journey that is Reptilians. Straying somewhere between acoustic and electronic, “Born” feels like a meeting between Death Cab For Cutie and Passion Pit – a very fruitful meeting at that. “Julius” keeps up the pace, featuring layers and layers of instrumentation. Underneath it all is a simple, throbbing bass line, covered with glittering synth lines and finally, Joshua Hodge’s distinctive, spacey falsetto.

Much of the album is built with a similar blueprint in mind. Reptilians engulfs the listener with its waves of fast-paced, driving melodies and sweeping synth riffs. There is something inherently fun about a solid, chipper synth tune and Starfucker certainly knows this; for the most part, they excel at creating ridiculously catchy dance tunes. “Mystery Cloud”, the second single from the album, is centered on a dancy, repetitive riff, carrying the tune from start to finish.

Further down the tracklisting lies “The White Of Noon”, one of the best songs on the album, but could also be described as the only song on the album or even worse, the band’s entire discography. As Reptilians drags on, the sounds begin to merge together, with no real distinguishing factor between them. Over the course of the album, the mishaps on their self-titled album begin to rear their heads again. While Reptilians is more consistent than the former, the band still seems to struggle to pull together an entire album of solid music.

This is not to say, however, that Reptilians is a bad album or that Starfucker is not creative enough to create a good album – both of these opinions lie on polar ends of the spectrum. Instead, Starfucker lies somewhere in between “an instant classic” and “average”. When considered individually, many songs from Reptilians, such as “The White Of Noon”, debut single “Julius”, and the more relaxed “Mona Vegas”, provide brilliant lapses into a jaunty, atmospheric escape of sound.

For the most part, there is nothing intrinsically new on this album that hasn’t been already done. Starfucker, ironically, find themselves trapped in a genre they helped to father, surrounded by the similar-soundingPassion Pit and MGMT. I, however, am not complaining. This is catchy, spacey, and overly fun synth rock. This is party music to live your life to. Or, if you are more of a partier, this is lively music to party to. Either way, you’ll have a good time.

Standout Tracks: “Julius”, “Death as a Fetish”, “The White Of Noon”, and “Mona Vegas”