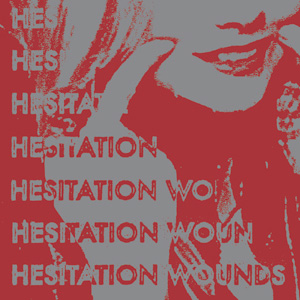 Jeremy Bolm of Touché Amoré has started a new band with Jay Weinberg (ex-Against Me!), Neeraj Kane (The Hope Conspiracy), and Stephen Lacour (ex-Trap Them) called Hesitation Wounds. The band is set to release a self-titled 7-inch on Secret Voice Records, and is streaming a new song called A. Smith (The Death Of A Teenager). Check out the stream here or below! Preorders of the digital EP and 7″ are available on Secret Voice’s website.

Bolm released this statement regarding the background and formation of Hesitation Wounds:

“Hesitation Wounds is the combined sound of different backgrounds and 5 hours of song writing. In May of 2012, the idea was to combine friends (some of whom had never met) from different bands and see what could happen in one afternoon. Jeremy Bolm, vocalist of Hesitation Wounds (and Touché Amoré), commented, “I told Neeraj Kane (The Hope Conspiracy, Suicide File, Holy Fever), Jay Weinberg (ex-Against Me!), and Stephen ‘Scuba’ LaCour (Ex-Trap Them, True Cross), ‘Let’s write as many songs as we can on Sunday and record them on Monday.’ Jay was in town and Scuba agreed to come out from Arizona for the weekend. What we came up with was three songs and an intro. We recorded them Monday afternoon with long time friend and always-available-for-my-stupid-shit, Alex Estrada. Lyrically, the songs are about witnessing the murder of a friend, the life and death of the inspirational underdog folk singer Phil Ochs, and the overall reality of life. Sonically, it’s an abrasive / no strings attached outpouring of fast and heavy hardcore not far off from the bands we’re already responsible for. We’re proud of the outcome and we hope you enjoy.” 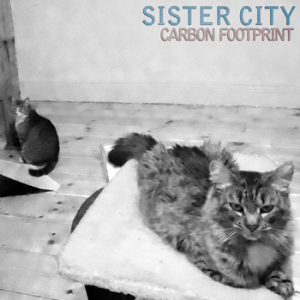 Having never heard of Sister City, formed only in 2007, I had no idea what to expect upon downloading their new album Carbon Footprint. I saw the genre “indie punk” thrown around quite a bit, but such a description is too vague to actually say much.

Opener “Hit Too Hard” finally put a sound to the name. Even though it didn’t quite answer the question of what “indie punk” means, it did provide a ballpark sound to work with. Initially, Sister City sounds like an opening band, reminiscent of The Loved Ones or The Measure, taking cues from bigger bands, but still lacking the chops to be headliners themselves. There is a familiar, almost generic feel to the music, but under the surface, there is a passion and effort driving the band, which is demonstrated all throughout the album.

The passion is most easily heard through frontman Adam Linder’s lyrics. Like early Rise Against, he’s usually making a point about the state of the human condition, but instead of actually calling for action like Tim McIlrath, he limits himself to biting observations with a cynicism very much in the vein of Say Anything’s Max Bemis. “The things I want are simple things, like love and trust and sanity” Linder notes on “IMPERATIVE.” Closer “How Much” brings his unease to a climax, “For a couplet I sold what was left of my integrity and I don’t have any goals / but I do have an apartment in a city full of people, and a subtle, sinking feeling we’re all equals.”

Lines like these permeate every song, but unfortunately, few of them actually stick, largely because there’s a distance to them, an apathy that doesn’t inspire the listener to do something about it. Linder’s vocals don’t help much either. They’re neither bad nor particularly good – they just tend to add to the generic overall sound.

While the music in general sounds largely familiar, Sister City does distinguish itself from the pack to some extent with their poignant use of rests. They immediately set to this trend in the stop-start “Hit Too Hard” and continue through with such usages as the pre-chorus holds of “Some Prefer Nettles,” the one beat rests on the repeated chorus of “IMPERATIVE.”  The rests are very calculated to add impact to the lyrics, and nearly always work well. It’s just a small touch, but it does make their music more distinct.

There is a certain level of maturity in their musicianship as well. Many of their songs have different phases to them- they don’t usually end up in the same musical place where they were at the beginning, but they’re still within the general sound, so the song isn’t too disjointed. For the most part, this too works fairly consistently, such as with the double-time outro topping off the already engaging “Ellis Island Blues.” The biggest offender with this patchwork style is “Eff That” which suffers from too much schizophrenia. The smooth verses don’t blend well with the No Use For A Name-sounding chorus, and the bridge is much too forced, making it one of the only songs that would be considered weak overall.

While much of their music is familiar, familiarity isn’t always a negative thing either. Sister City wear their influences on their sleeves, and fans of the general scene won’t be disappointed. Much of their music sounds like a lighter version of Against Me!, and they wear this influence proudly, even naming a song “Reinventing Adm Linder.” Ironically, this song is eerily similar to “Hey There Delilah.” Plain White T’s comparison notwithstanding, it’s actually one of the album’s lyrically strongest and catchiest songs overall.

Swaying away from Against Me!, Sister City turn to NOFX with “IMPERATIVE,” driven by a bouncing bass that sounds like it’s straight out of “Timmy the Turtle.” Pulling out all of the stops, “How Much” channelsManchester Orchestra with a slow buildup to a climactic finale. These songs are generally good for what they’re worth, but at the same time, they feel like the diet version of some of your favorite bands.

Overall, even after a few spins, I still find that Sister City is a very difficult band to describe. After some thought, I have concluded that one of the most apt metaphors is that Sister City is a cloud. The band can’t be clearly defined or put into one particular musical box. Their influences are numerous, yet they still have a single cohesive, recognizable sound. Finally, there is definitely substance to their music and lyrics, but when you reach out to touch it, you may not end up feeling much in the end.