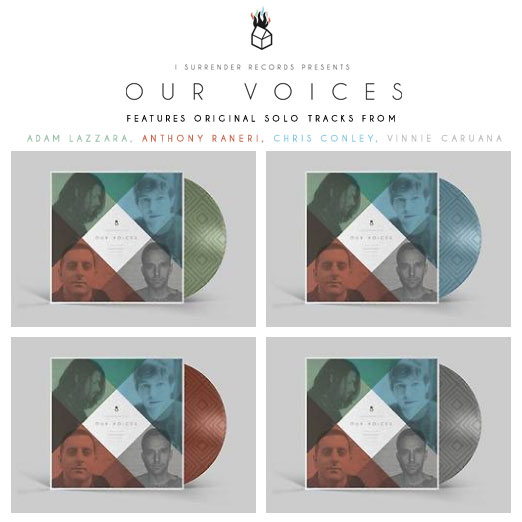 Adam Lazzara of Taking Back Sunday, Chris Conley of Saves The Day, Anthony Raneri of Bayside, and Vinnie Caruana of I Am The Avalanche will be releasing a brand new EP together entitled Our Voices.

I Surrender Records to celebrate their tenth birthday “wanted to give musicians the opportunity to step outside their stylistic box – no guidelines, no expectations.” The EP is set to drop digitally and on vinyl on November 25th. The vinyl includes 4 color options (red, blue, green, grey) and b-side etching and will be available on their webstore. Stream Anthony’s song called “String Me Along” below! 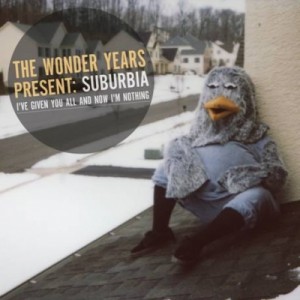 Let’s face it: the pop punk movement is nowhere near its past prominence. The former progenitors have all been missing in action, and very few new bands have been able to step into their shoes and keep the movement afloat.

But all hope is not yet lost. This year may mark the resurgence of pop punk, with the return of Taking Back Sunday and Saves The Day, just to name a few – all set to release new records during the next few months. And it’s certainly hard to ignore the new Fireworks album, Gospel.

And it’s even harder to ignore The Wonder Years.

In 2010, the band hooked listeners everywhere with their second studio album, The Upsides, which was later released by their new record label Hopeless Records. In a struggling scene, The Wonder Years shone and shone brightly.

Suburbia I’ve Given You All and Now I’m Nothing is not a new take on the genre, nor is it even much different from The Upsides, but it is a refreshingly honest and raw look into the lives of the Philadelphia, Pennsylvania band. With that in mind, Suburbia is fundamentally built the same way The Upsides was, filled with relatable tales of misery, loneliness, struggle, and ultimately triumph. In essence, Suburbia could be considered The Upsides 2.0, and there’s certainly nothing wrong with that.

Opener “Came Out Swinging”, a track that is aptly titled, fades in with feedback and a muted voiceover murmuring “My mind is made up” and “There’s gonna be trouble.” The intensity of frontman Dan “Soupy” Campbell’s vocals on the opener set the tone of the album, continued with the blaring guitars and unforgiving drumming of the next two tracks – “Woke Up Older” and “Local Man Ruins Everything”.

“My Life As A Pigeon”, a song that details the struggles that accompanied the band’s recent success, is directed at the band’s fans and non-fans. On one of the album’s catchiest hooks, Soupy belts out “I won’t be afraid of making mistakes if you’re listening. Are you listening?”, straying from the outright positivity (“I’m not sad anymore”) on The Upsides and presenting the jaded nature of full-time band life. Tracks like the religion-criticizing “I Won’t Say the Lord’s Prayer” further demonstrate a lyrical maturity from Soupy, while “You Made Me Want To Be A Saint” and “Hoodie Weather” highlight the instrumental progression of the band as a whole.

Guitarists Matt Brasch, Casey Cavaliere and Nick Steinborn and bassist Josh Martin have all become much more technically capable. But the most noticeable growth is that of drummer Mike Kennedy, who delivers precise and rapid beats throughout Suburbia. As a unit, The Wonder Years have improved dramatically as songwriters, backing the raw and largely unedited vocals of Soupy. Closing track “And Now I’m Nothing” exemplifies the band’s new sound, complete with the crunch of the guitars, frantic drumming, and soaring vocals.

Suburbia I’ve Given You All And Now I’m Nothing takes all the qualities that set The Upsides apart and amplifies them, resulting in one of pop-punk’s finest releases in a long time. With Suburbia, The Wonder Years cement their place at the forefront of the scene, accomplishing the tremendous feat of topping The Upsidesand managing to do so without compromising their roots and perhaps more importantly, their authenticity.

Standout Tracks: “Came Out Swinging”, “My Life As A Pigeon”, and “And Now I’m Nothing”

Also via Twitter, members of Acceptance are trying to reunite the band. Personally, I would be so excited if Acceptance reunites. They ended too soon and with too much talent.

According to Arun Bali’s Twitter, Saves the Day has completed their new album, Daybreak. Look for it to be out sometime in 2011.

Claudio Rivera is supposedly the new drummer for Saves The Day.